Under Catalina, when I move the output window to my second screen and press Cmd-F, my main screen turns black and then Live is not visible anymore. Live is not running full screen, btw - I’ve seen other questions about that. For now, my only option seems to be double-clicking the title bar of the second screen to make it full screen, but that leaves me with a thin white frame around the edges. I do not have this issue with running video from Live itself (for example, with Zwobot).

Thanks for sharing your question here on the forum! Since your main screen turns black when setting Videosync to fullscreen on your second monitor, I assume that you have the Displays have separate Spaces setting in the macOS’ Preferences disabled? With this setting enabled you should not have this issue. 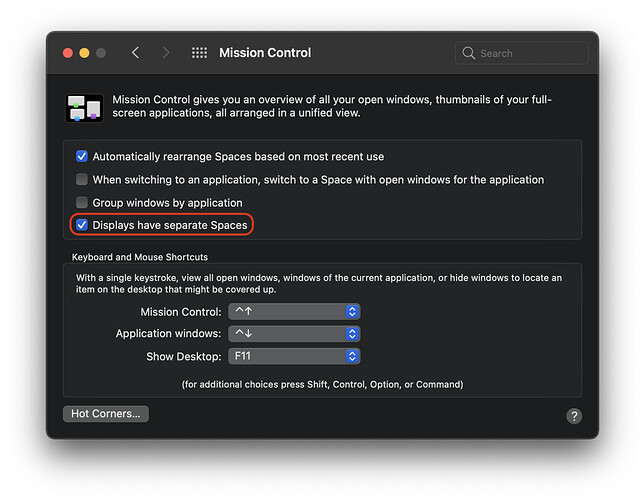 If you wish to not enable Displays have seperate Spaces, an alternative is to make Videosync’s window cover the entire screen of the second monitor, and then disable Border in the Control Window, (CMD+K): 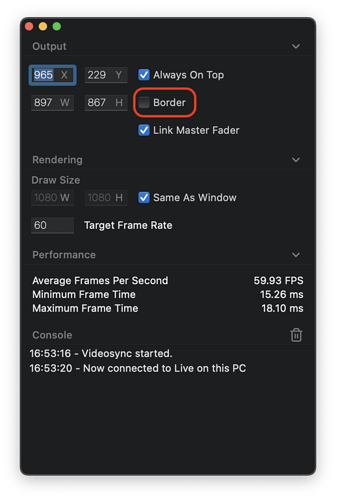 Ah, thank you, Jean-Paul. I had forgotten separate spaces entirely…

If you wish to not enable Displays have seperate Spaces, an alternative is to make Videosync’s window cover the entire screen of the second monitor, and then disable Border in the Control Window

I prefer to use this second method. In the unlikely event of a VS crash, having separate Spaces will leave a Finder menu bar visible to the audience. If you use a pure black desktop background (best practice!) in the event of a crash, the screen just goes completely black.

Good point, PitchBlack, especially since I sometimes have to alternate between different video applications on stage.

Wow! That sounds… a little scary

What different video apps are you swapping between live, if I may ask?

BTW having had a play with both options, I’m favouring using “displays have separate Spaces” in the studio for the convenience of the double-click to go fullscreen, but the other method for shows (when covid lets us again!)

Studio vs shows. Yes, that makes sense.
I do various shows with visuals that are (partly) generated on the spot.
The reason why I’d completely forgotten about “separate Spaces” is that I developed a bunch of compositions using Zwobot and Vizzable all in one gig but in different Live sets. Both use the Live thread rather than an external thread like Videosync. Switching between the two was do-able, since they have more or less the same approach toward full screen output and don’t need “separate Spaces”.
I fear that soon I will find myself in situations where I will also have to use Videosync in the same gig since I started to develop with it and the older works are nearly impossible to port to it. Apart from Videosync being snappier, I do find that its architecture invites to a more conceptual artistic approach: There is no hiding behind a plethora of fancy effects. The fewer, almost spartan tools are very efficient and you have to know exactly what you are doing.

I meant the previous only in a positive sense: that one can definitely create very complex visuals with few fx. Very efficient. Very fast.